One of my plans for the summer, when hopefully I and my friends have a bit more time is to get a GURPS campaign running. I haven't run a GURPS game in about five years, near as I can figure, and to help get my head back in it - as well as to get some experience with GURPS 4th Edition I decided to run through a little encounter with some NPCs for one of the campaigns I've been working on for oh, six years or so... 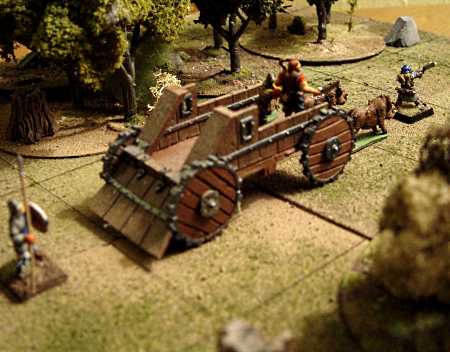 (The campaign mentioned above is my fantasy campaign which I've made available online!)

Read on for a blow-by-blow of this fight!

The general setup is a dwarven trade caravan, ambused by goblins. The extreme basics of the world - the goblins are essentially stone-age level tribes. The humans are roughly dark-age in technology, and the dwarves have approximately early 18th century level technology. The dwarven caravans make their way throughout the human lands, trading for things that dwarves like but can't make themselves - such as beer and cheese. They typically have some permanent dwarven guards and hire local humans for legs of the trip that are more dangerous.

In this case we have two dwarves, the leader "Oggor" and one guard (no name). He has hired a single human guard to help our, also with no name, as well as a human teamster type who is in charge of the wagon and oxen (named "Fraetan").

I just grabbed a bunch of figs to play this out - ended up with seven or eight goblins, and I used an old Ghost dwarven war wagon to represent the wagon, along with a couple boards to represent the oxen (who don't do anything during the fight.)

You can see the dwarven guard leads the way, followed by the wagon with Oggor and Fraetan, with the human guard in the rear.

In terms of stats, I don't feel like tpying all that out - of the bunch, the dwarven guard is the best fighter, and best equipped carrying a crossbow and axe, and wearing a double mail hauberk. Oggor is more lightly armed, with a mail shirt and axe. But he is the only one carrying firearms (a status symbol for dwarves, not common) - he's armed with a blunderbuss and two pistols. Fraetan rides next to him, carrying crossbow and axe, and wearing only a fur tunic and cap. The poor human guard is probably the worst combatant, carrying spear and shield, and wearing cloth armor.

The goblins are split between melee and missile troops. The missile troops including bowmen and slingers, while the melee troops carry spears or clubs.

To give the goblins some sort of chance (I didn't think they had the numbers to do much damage) I gave them the element of surprise. They opened with a volley of flint-tipped arrows and sling stones. Both dwarves were hit, but their armor protected them. An arrow also nearly struck Fraetan, who was saved by the high side of the wagon. The melee goblins charged towards their nearest enemy.

Now the caravan could react - which involves making an IQ check before each character can act. Of these most have an average IQ score (10) except Oggor (12) and Fraetan (11). Oggor and Fraetan make ther IQ rolls, meaning they can act next round. Meanwhile the missile goblins begin reloading, and the melee goblins close into melee range. 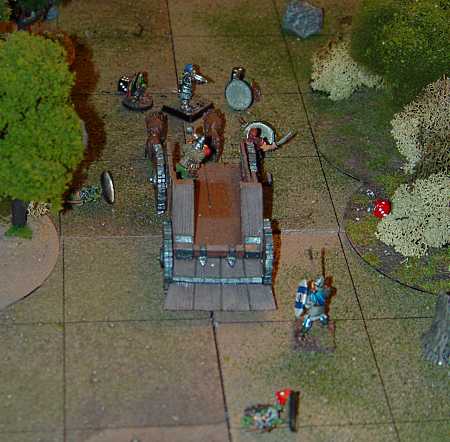 Now, we enter round three (the 3rd second of combat) - Oggor readies his blunderbuss, while Fraetan - seeing a goblin bearing down on him stands up in the wagon and raises his axe in time to parry the goblin's attack. Two goblins reach the dwarf guard in front, and both hit - but his heavy armor saves him again! The human guard passes his IQ check, only to be stabbed in the right leg by a goblin with a spear.

Oggor, seeing a goblin trying to climb up the side of the wagon to get at him with the spear, fires his blunderbuss at point blank range - turning that goblin into hamburger. The other dwarf fails his IQ (again) as the goblins continue to beat on him. The human guard steps back and stabs a goblin in the chest with his spear, and the goblin beings to limp away from the fight - leaving the human with a couple others other to contend with.

The fight continues - and the dwarf in front continues to fail his IQ check! For an IQ of 10, he ends up failing eight rounds in a row! By the time he can, act he's actually been moderately wounded from all the goblins beating on him - some landing lucky blows on his less armored areas. I figured a smart opponent would aim for his less armored areas, but hey - these are goblins! So I just use random hit locations. One really bad blow was a lucky hit to the face with a club - ow!

Oggor, having dealt with the immediate threat proceeds to draw, aim and fire his pistols, dropping two of the goblin bowmen. He's then out of charged weapons, but the fight is over by then. Fraetan manages to cut down his goblin with his axe, then draws his crossbow, shooting and killing another goblin bowmen.

The poor human guard fares the worst, ending the fight badly wounded, but having take out several goblins by the end.

Of course the goblins end up fleeing after losing more than half their number, but that's hardly a surprise - in fact they did far better than I would have expected - they really lucked out that the front guard remained surprised for so long - he would have really laid them out!

Lessons learned? For one thing, I really need to get or make a GM screen that has a lot of the oft-used tables. Enough has changed, or my memory has failed enough - that I can't remember a lot of the common rules. Also - an extra point or two of IQ may be more important than a fighter type would ever expect! If there had been twice as many goblins, I doubt the caravan would have survived.