Log cabins were a staple of the American landscape for probably a good three centuries. As such, they can be a useful terrain item for any wargame set in the colonial or American Civil War period. Luckily they tend to be fairly simple structurally, and there were also a wide variety of styles. If you're thinking about building one of these for your collection, this photo reference may be useful to you. Read on for photographs of three very different log cabins.

Our first cabin is a fairly small, not terribly well preserved cabin. This would be a fairly typical frontier cabin (with the exception of the glass windows perhaps). Notice the weather and color of the wood.

The second cabin is a far more complex cabin with large windows, a second floor, a balcony, etc. This is also an original cabin, probably around 150 years old. Notice the vertical cuts on the logs - those are from the original axe work used to flatten the logs! Most cabins used logs that were roughly flattened in this way - if there was time. It helped reduce insect problems.

The last cabin is a sort of a combination of old and new. This cabin was built from old logs scavaenged from two old cabins that were deteriorating as well as an old barn that was torn down. As such it is both old and new... Notice how "unstraight" the logs actualy are. The color of the wood comes from a protective treatment applied after the cabin was done.

The construction picture below shows the cabin before it was finished - notice the styrofoam used in the chinking- not just miniature terrain builders use styrofoam! 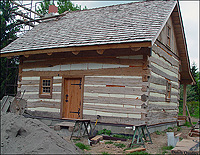 Finally, the same cabin in a night-time long exposure picture. 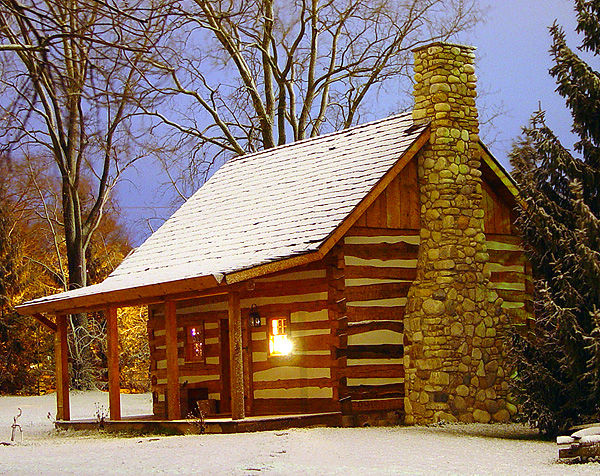