One of the most common roofing methods over pretty much all of history is the thatched roof - or roof made with grasses. It's very common in rural areas, in a variety of forms. It's also not something I've tried to build before... Read on below to see how I did it. 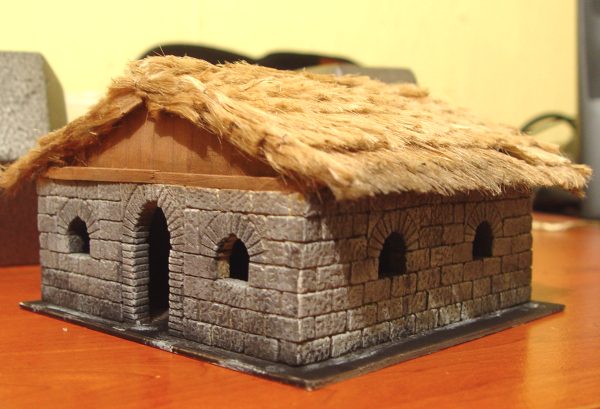 I read up on a variety of different ideas of how to do this online, and eventually settled on using "jute" or twine. Mainly because I had a huge spool of it to use! But another thing going for it was that it seemed to be a good natural color, so I wouldn't have to figure out how to paint it somehow.

I began by cutting small segments of jute, and then "unrolling" the braided fibers, and trying to straighten them out a bit. The first problem was how to attach these to the cardboard roof. My first approach was to lay down a bead of glue and stick them into that - but that was messy and didn't work very well. So I settled on using tape instead. Basically, I lay down a strip with the sticky side up, with the ends folded down to stick it to the table. Then I stick each little segment onto the tape. 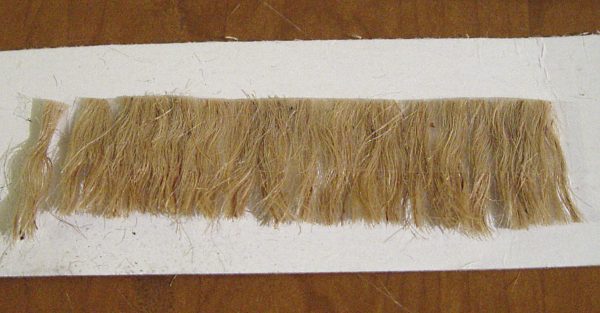 Then I lay a second piece of tape over the top of the piece, to stick the two together. Then I just trimmed the top and edges to tidy things up, make the "loose" bottom portion even, etc. Another option is to take a single "clump" and tape it's top to make a small bundle (as on the left above) which is handy for the sides of the roof, etc. 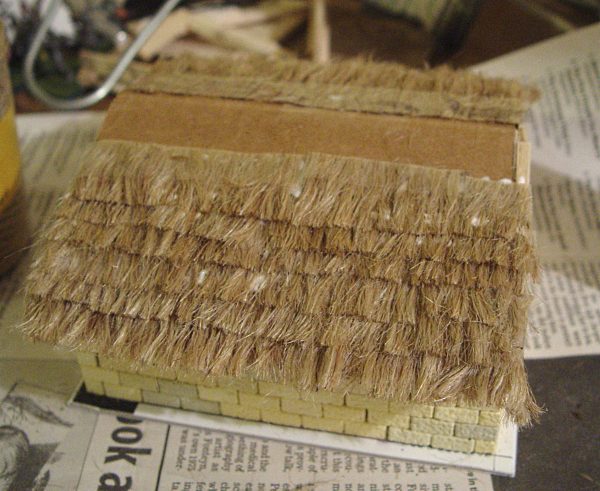 Then just glue each strip to the roof. The taped part makes a handy flat surface to lay your bead of glue on, and gives you a straight edge to keep the layers fairly straight. The loose parts cover the taped parts of the layer below, which works well.

Finally I used the "bundles" to cover the edges and along the top ridge of the roof to finish things up. Also you can see on the edge of the roof where I originally tried just gluing the twine down - it ended up very stiff and discolored, so the tape system works quite a bit better.

I'm pretty happy with the end effect, although it is pretty time intensive. But hey, it's a hobby, so what's the big deal?